I met Mathilde in September on my annual trip to Perpignan, France. I was there to attend a photography festival and it hadn’t occurred to me that I might finish the week shooting a fashion shoot. Much less one on a boiling hot nudist beach with a beautiful girl wrapped head to toe in furs – but that’s exactly what happened.

There’s no such thing as a beginner 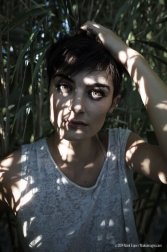 Whilst I enjoy shooting with confident agency models there’s definitely something exciting about working with a could-be model. They don’t realise what they have and if you’re lucky, you’ll get to see that sense of discovery happening right through your lens – and so it was with Mathilde. More often than not, working with amateurs can result in great photographs. Their sense of unpredictability at being photographed can make for absorbing, unguarded moments rather than polished poses. Leafing through many fashion magazines, genuine ‘caught in a moment’ photos always leave their forced, artificial contemporaries standing. If you haven’t seen the shots I’m talking about there’s a forest of them waiting for you in the glossies. Go look, they’re all there: ‘dead behind the eyes’. My contention is if you want to a shoot to come alive, then shoot somebody who is alive – be they a pro or a potential-pro in the making.

Stretched between days and nights of festival chat and actual sleeping there wasn’t much time. In fact there was one time available. 7am-11am on Mathilde’s one solitary free morning. As I said in the intro I hadn’t considered I might doing a fashion shoot and one thing that saved me more than the alarm on phone – a cheap x1.4 lens adapter to bring my erstwhile 16-35m f2.8 lens into the land of 50mm portraiture. It’s basic, it’s scruffy and it’s saved my bacon countless times and the x1.4 did it again – and as such has rightly earnt it’s constant place in my cramped camera bag.

After warming up with some basic shots in cold morning air, the sun finally considered cutting through the gloom of the early morning and coat the land with harder shadows. It would soon be time to hit the beach.

On the previous day, Mathilde and I had talked about photography. Sat around the kitchen table I translated what could be done with a camera with only four hours to shoot. Setting expectations is vital for both you and your model. You are co-conspirators in a shared plan and everybody has to know the deal. Mathilde suggested she could bring a few things prop-wise like some fake furs. This is my perfect scenario. A model with ideas with her own. Don Diego (Charlotte’s cat) wasn’t as impressed as me, curling his tail around our legs on the hunt for attention or possibly even food. Not interested in photography or modelling, he’d still gate-crash the shoot next morning (as you can see from the animated gif). Bless.

Windows wound down, driving through the mid morning traffic to the beach we were in a race with sun. Climbing higher and higher into the sky with each passing minute it was stealing away precious dramatic shadows from us. Such are the considerations of shooting in available light. Climbing through dunes we finally made our way onto the beach. Wrapping Mathilde in furs, distant locals peered at us thorough the heat haze. I guess a model dressed head to foot in furs in 35+ heat I looked pretty weird. No, Mathilde told me. It’s a nudist beach. They’re used to people to taking clothes off not putting more on. Ah…

Gradually with each shot we made our way more in-shore, where a loose narrative was taking place and it was all Mathilde’s doing. Wrestling with her clothing, she would disappear from view, wrapped up in a furby-like ball, only to emerge like a smooth-skinned hatchling. Finishing off in the tall shadowy reeds, the shoot was over all too soon like most good things.

Working with Mathilde was fun and easy and that’s how all the best shoots should be. I’m pleased to say that I will be shooting with her again soon – this time in London – and I’ll be interested to see what influences she brings. À la prochaine…