The idea with this shoot was to create a femme fatale / street character as if drawn from a graphic novel but photograph them in a real life setting. Fortunately I’d been in contact with our model, Adele about doing a test and this concept seemed like a perfect fit for her brooding good looks. 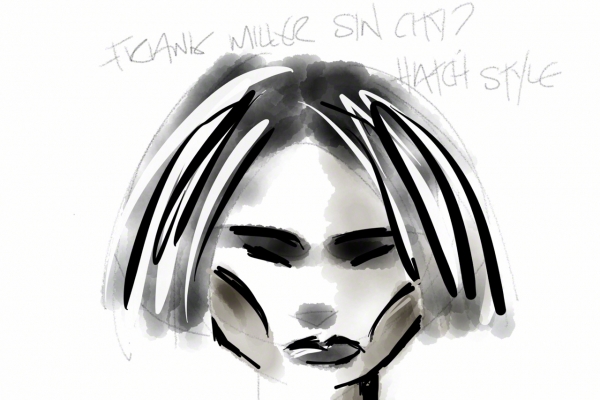 I was already familiar with cartoon characters superimposed over real life from many films (Who Framed Roger Rabbit) and videos (see A-Ha’s ‘Take On Me’) but after talking it over with Amrita, our make-up artist we decided go with something different. We thought it would be really great to make a model look like a living sketch but through make-up and body paint alone. In terms of a creative aethestic I immediately thought of the ‘Sin City’ graphic novels of Frank Millar. That said, I wanted eschew the constantly-raining night time stereotypes that had already been thrown up by the film versions of ‘Sin City’ graphic novels. For this shoot I wanted to do something different and instead shoot a graphic novel character in bright daylight whilst still retaining that sense of a gritty, hard edged environment. In a bid to keep things simple we chose to concentrate upon atmosphere rather than narrative and depict a character waiting for something or someone to happen upon her path.

Since this was a test, I really wanted to try out a few analogue lenses I’d been collecting over the last few months and in particular a new 85mm Petzvel lens we’d just recently received. Manufactured in Russia from Zenit, this was originally from a Kickstarter project that my partner Phine Ka had found online. Going to back to the Petzvel’s original design, the Kickstarter team had set about recreating this turn of the century analogue lens to be used on today’s modern DSLR’s. 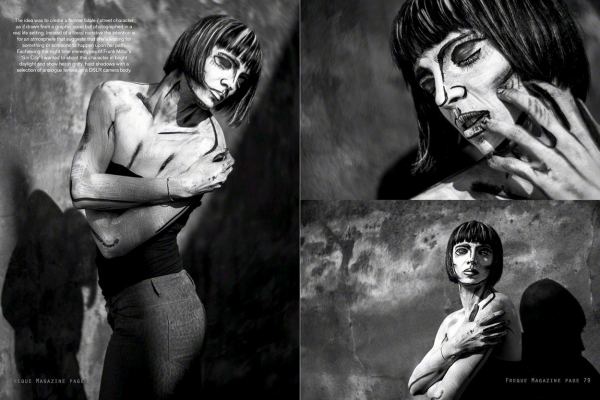 Fashioned in bronze and with it’s telescope-like focussing rail it definitely turns heads before you even see the results. It’s chief photographic characteristic is to swirl the background of a portrait into a soft spiral which centres your attention on the subject of the photograph. It’s a great technique but as with a lot of  eye-catching tricks some restraint is required. So by using the Petzvel, together with a Lens Baby I managed to play down the swirly separation whilst not losing any of the graphic, gritty texture of the location. Lighting-wise I went with my usual combination of mixing daylight with Ice lights and reflectors. The Ice Lights made for great catch lights in the eyes and reflectors helped boost the dim UK sunlight into something suitably dramatic.

At the end of the shoot we knew we had something special but after going through the photos I was unsure as to whom to approach re. publishing it. The problem with stepping out of the conventional norms of fashion photography is whilst you can end up with something very creative, it might not fit into a magazine’s look or theme for a particular issue. Fortunately Amrita recommended Freque magazine which specialises in shoots using make-up and body paint and a week later they contacted me saying that they would like feature our shoot.

I’m delighted to day that it is now available in both print and digital download, with a larger selection of images from the shoot available here on the web site. If you would like to purchase Freque Magazine vol 11 part 2  you can do so here or get more details online at www.frequemagazine.com.