This month sees the release of a new video campaign that I’ve directed for Patrick Persaud Ltd about bespoke personal styling for men. Featuring Patrick himself talking about their range of services the video was designed to work across a wide range of formats and media platforms.

Brevity is the key 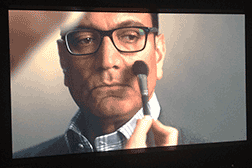 Talking over the project with both Patrick and his business partner Richard Pugsley we quickly agreed that keeping the video short and to the point would help in holding the attention of the audience. In today’s digital age with documented online attention spans ranging from a mere 4-6 seconds it was important to keep this video brief. To this end we embarked on an intensive period of research so as to find out how best to communicate the Patrick Persaud brand, its services and all the practical benefits it could offer to potential customers. After a few weeks of drafting the final script was in place and we were ready to start storyboarding.

Video is a visual medium and whilst a script is a technical blueprint of what has to be seen and said there’s no substitute for a good storyboard. A storyboard is a simple no-frills cartoon rendition of what will be on the screen at any given moment. Every video I do nowadays is intensively storyboarded not just for the client’s benefits but also the crew’s. Further to this I also animate my storyboards. It’s a much quicker way of seeing if something is going to work rather than haemorrhaging time when it comes to the actual shoot. Not only is a storyboard essential to communicating the vision of a video it is also the backbone to a well thought-out production schedule. By knowing exactly the precise number of shots required to build the video we could really concentrate on how time would be spent on-set. I’m delighted to say that we estimated for a single day’s shoot with no over-runs and that’s exactly what happened. Patrick had extensively rehearsed the script beforehand and (such is the nature of things) was really enjoying himself by the end. Sitting in front of a camera can be a daunting experience even for those who are used to it but Patrick really managed to communicate his passion for styling whilst also hitting key points about his company’s services. Again, the value of a solid script paid us back by making sure that his dialogue was always relevant and free from any superfluous language.

Putting it all together

At the outset we decided to shoot this video on an Arri Amira video camera. Predominantly used in broadcast and film the Amira might have seemed an expensive choice for this kind of shoot but we wanted to achieve a high production value to reflect the nature of the Patrick Persaud brand and the quality of the items that he works with. By keeping the production down to a single day’s shooting we were able to shoot with the camera that we wanted and achieve the production value that was necessary. Working with the Amira‘s high quality footage would become a revelation in terms of how much latitude we had in the editing and grading in this project and I believe the end result unquestionably shows that.

Getting the message out there

After editing the video and making a handful of adjustments the video was ready for release.  However at the outset we already faced the issue of people’s modern-day attention span and so we developed two edits of this advert: one long, one short. The short one would tease viewers with what the longer could expand upon. On top of this we created a series of static and animated banners for social media and a selection of micro-edits which focussed on key services which would run for 6 to 10 seconds on sites like Pinterest, Instagram, Facebook and Twitter.

One of the other subjects that we spoke about during the script stage was subtitles. We agreed that including subtitles would improve not only the video’s message for the hard of hearing but also for viewers watching the video in listening environments. In addition to this, and to reflect the Patrick Persaud brand’s international clientele we also added a full range of professionally translated subtitles which included Mandarin, Russian, French, Italian, German, Japanese as well as English which are viewable on the Patrick Persaud YouTube channel.

Shooting so often on my own or with only a handful of assistants this was a big step forwards for me by working with a larger crew on a bigger production. Now that it’s all finished and the teaser adverts are now starting to appear in social media I couldn’t be happier with the outcome. Working on larger scale videos requires a lot more preparation and pre-production than just picking up a camera and starting to shoot. With this campaign there were so many things to do that it was actually liberating to have such a competent and good natured crew around me to help realise it.